It’s a Dogs Life… It is a sewing blog honest!

Posted on January 4, 2017 by acraftteacuppa

My poor Mr Bear has been in the wars lately… He has recently had to have a nasty operation to repair a torn cruciate ligament. The vets at the Royal Veterinary College Queen Mother Hospital were absolutely fabulous however Mr Bear came home feeling very sorry for himself indeed.

For the first few hours after he got home Bear sat and cried. Now if there is one thing I can’t bear is my Reggie Bear crying. I initially thought it was pain that was causing him so much distress. Every time he tried to move the huge cone of shame caught on the table and tangled him up so, in desperation, I took it off for a while. All most instantly he stopped crying (and so did I) YEY!

Now he can have the cone off IF he is supervised and doesn’t try to lick his operation wound. He didn’t… My son, however, threw a hissy fit at me! I spent the first night sleeping on the kitchen floor with Bear…. I say ‘sleeping’ but I didn’t actually do a great deal of that at all! The oven is spotless and I finally cracked on with finishing re-upholstering my dining room chairs whoop whoop

Whilst working on my dining chairs (blog link coming soon) I used some heavy calico… a lightbulb moment later and I’m on the floor man handling the dreaded plastic cone and getting the most filthy looks from under the table. Now the plastic horridness is way too big and Bear can’t move about in it so I figured if I made it a little shorter and softer then he wouldn’t cry so much and he would be comfortable in it without being so restricted… except where he needs to be of course! I started by tracing round half of the cone. I only have a long strip of calico off cut so I can’t do it all as one piece. So four pieces required. 2 pieces of heavy weight interfacing. And off to the overlocker we go…..

Oh! I forgot! The other week when I was buried underneath miles of satin and tulle for a Disney Princess Belle dress I kinda forgot about a pin and kinda wrecked my overlocker cutting blades DOH!

Overlocker interlude… how to change your blades blog to write next…

Ermm ok… now how do I fix it together? Kam Snaps it the way to go I think… and I can play with my new sewing tool too.

Last week I treated myself to this expanding button/buttonhole gauge from Jaycotts. I saw them months ago but hadn’t been able to source one in the UK. Sadly the shipping costs from the USA makes buying one way too expensive but finally I have been able to buy one at a very reasonable priced in the UK. I do love a gadget me 😀 and this one can be used for all sorts of applications not just button and button hole spacing. Marking pleats would be a cinch with this baby.  They do sell out pretty quickly but you should be able to request and alert when they do come back into stock.

So using my new toy I marked off a line on one side for some Kam Snaps. And then, keeping the gauge in the same position I then marked off two lines on the other side so I have some room for adjustment. And here it is… the finished product as modelled by Miss Kishi Mojin 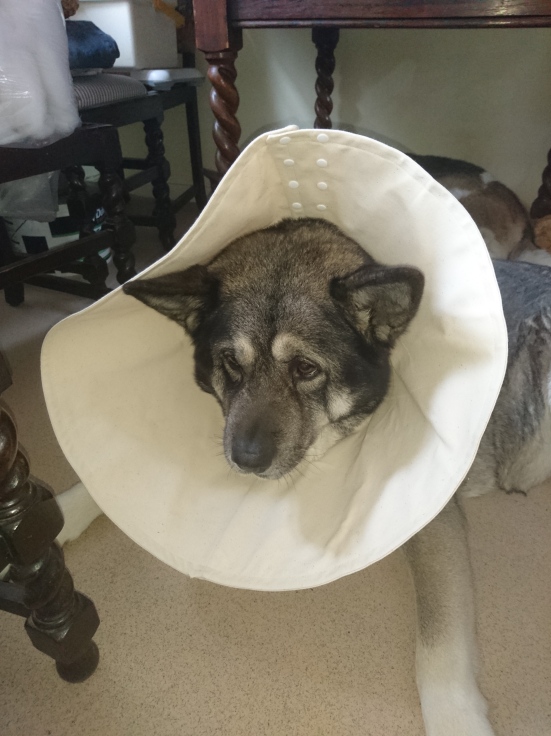 How impressed does she look!

I actually wrote this blog a while back but didn’t get round to posting it… Mr Bear is now fully healed and back to normal. Miss Kishi Bear however, has done the very same thing!! ARGHHHHH

Oh well, at least I have a readymade cone for when she has her operation at the end of January

Vintage kinda gal loves all things 40s 50s and art deco. Loves all kinds of crafts especially sewing. addicted to fabric, antiques and shoes. Have two sons and two Akitas that I adore. Passionate about our armed forces, WW1 family history. Living on WW2 Rations for Charity for a whole year. Would one day like to have a tea shop/haberdashery/sewing rooms to relax chat and teach/share all sorts of craft skills in <3
View all posts by acraftteacuppa →
This entry was posted in Sewing and tagged #akita, #coneofshame, #dogcollar, #handmade, #lovesewing, #sewcialists. Bookmark the permalink.

1 Response to It’s a Dogs Life… It is a sewing blog honest!